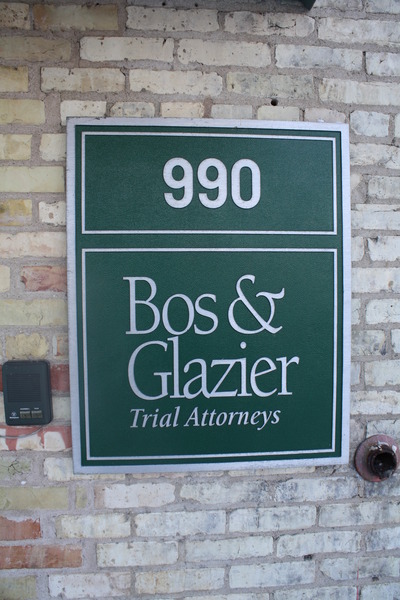 In today's world of complex litigation, not every lawyer can perform every type of specialized analysis required to successfully try a case. When an intellectual property case (involving copyrights, trademarks or patents) is tried to a jury, the case frequently requires a trial team with both "intellectual property" attorneys and "trial" attorneys. We fill the role of trial attorney. Our senior partner was trial counsel on the team representing Haworth Corporation in its hard-fought patent infringement case against Herman Miller. Working with patent counsel from Washington, D.C., we achieved a pretrial settlement of $44 million for our client.

Property owners do not have to accept whatever the government offers to pay when it condemns private property and converts it to public use. Bos & Glazier has substantial experience in condemnation cases and the area of law called "eminent domain." Our settlements in such cases rank among the largest in Michigan.

In the late 1970s, massive chemical contamination of the Love Canal in upstate New York became front-page news throughout the country. Niagara Falls was the focus of nationwide concern about pollution to groundwater. It was the tragedy of Love Canal which caused the United States Congress to enact the "Superfund" legislation. Hooker Chemical (later acquired by Occidental Chemical) fought a bitter coverage battle with its insurers. In what was likely to be the only jury trial involving Love Canal pollution, Bos & Glazier was retained as trial counsel for an insurer sixteen years after the case began. Our team's preparation of a convincing position for our client forced a settlement on the eve of trial. This result was even more gratifying since Bos & Glazier was scheduled to begin another jury trial, in a separate multi-million dollar case, in Wheaton, Illinois soon after the Love Canal case. In both cases our opposition insisted that settlement was contingent upon Bos & Glazier lawyers not trying the case for any remaining party. We have similarly managed and achieved excellent results in other major coverage litigation nationwide.

Defending a highly contested case where a Japanese-made kerosene heater overturned, allegedly causing the death of one child, seriously injuring numerous other children, and massively disfiguring a ""hero-plaintiff"" who tried to rescue children from the flames, Bos & Glazier lawyers were undaunted. We dug deeper to find the real cause of the disaster. After meticulous preparation, including tracking down witnesses scattered throughout the country, we developed a plausible alternative theory regarding the cause of the fire. As a result of key admissions we obtained during depositions, we eliminated the huge downside potential of the case and resolved it for substantially less than the plaintiff's demand.

Bos & Glazier has also successfully represented plaintiffs in product liability cases. From the tragic losses caused by airplane crashes to the life-altering effects of failed medical devices, our firm has helped victims and their families to recover substantial damages for injuries and wrongful deaths.