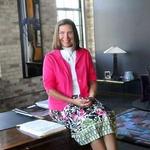 Carole D. Bos is a trial lawyer and a nationally known author and lecturer.  She loves to try cases.

At a time when few women were trial lawyers, Carole started her own law firm.  With clients who seek her help for all kinds of problems, ranging from complex commercial issues to wrongful death claims, she is at home in the court room.  She is a member of the Million Dollar Advocates Forum - a prestigious organization limited to trial lawyers who have won million and multi-million dollar verdicts, awards and settlements.

She puts her skill as a cross examiner to work for diverse clients - farmers whose land is condemned; businessmen whose inventions and copyrights are threatened; and victims whose lives have been totally disrupted.  Bos' compassionate approach with people who have lost a loved one, or sustained a serious injury, is distinguished from her reputation as an aggressive, hardworking fighter for her clients.  Twice in the last four years she and her partner have achieved West Michigan's largest settlements for their clients.

Seeing both sides of an issue for more than three decades, she prosecutes cases for plaintiffs but also defends litigation for corporations.  Bos is thus able to help her clients see the other side and, therefore, be fully prepared for what is to come.

Carole has handled many major cases, involving hundreds of millions of dollars, in state and federal courts throughout the country.  She has written numerous articles in professional journals, co-authored two legal books and frequently gives talks on trial advocacy.  She served as Special Attorney to the United States Attorney General - a rare feat - from 1997-1999.  As a four-year co-chair of the ABA Section of Litigation Insurance Coverage Committee, she achieved national recognition.

Bos has written two inspirational books: Life is a Nonstop Event and Marriage is a Balance Beam.  She is the creator and primary author of a very popular Internet site, AwesomeStories.com, wherein she applies her courtroom approach of presenting evidence to interesting topics from history and pop culture.

Recognized for her many contributions to the legal profession, Carole is known as a "Super Lawyer" by her peers, has received various honors and is listed in numerous "Who's Who" publications.